Holistic simulation models running in parallel to a battery system as so-called digital twins have drawn increasing interest of researchers in recent years, especially for large-scale and investment-intensive automotive, marine or stationary systems.

In this context, the digital twin is a virtual model of a battery system mirroring the electro-thermal behaviour of the system and therefore allowing the comparison of measured and simulated signals for monitoring and analysis of the physical system (see Figure 1 above).

Li-ion batteries performance decreases due to among others chemical reaction between electrolyte and electrodes; the aging process occurs even if the battery is not used, and is accelerated by exposition of battery to different temperatures. While in use, each individual Li-ion battery cell generates heat, which affect its intermediate surroundings.

The NAUTILUS project investigates hybrid battery and fuel cell energy systems for next-generation cruise ships in order to replace marine engines fuelled by heavy fuel oil by novel propulsion system designed for modern sustainable shipping. Due to intended use of the battery in the propulsion of a large passenger ship, it is unimaginable to employ only one individual battery cell. Instead, battery cells will be structured in modules and racks. This is why in the thermal domain, both the average temperature as well as the distribution of the individual battery cell temperatures within such a multi-cell structure, are of high relevance in preliminary analysis since they influence the aging progress as well as the intensity of the occurring electrical cell-to-cell variations. In this context, currently used approaches such as numerical Computational Fluid Dynamics (CFD) and thermal equivalent circuit models representing the current state of the art in calculating the temperature distribution.

However, the existing approaches usually come with two major drawbacks:

2) During computation of the obtained models, both approaches do not allow a real-time simulation of complex multi-cell structures consisting of thousands of cells as common in the named applications.

In this context, MAN Energy Solutions Technology Development team intends to present a novel performant and non-destructive characterization and modelling process which allows the calculation of the temperature distributions within a lithium-ion battery module with a comparably low computational effort.

For modelling the temperature distribution, a two-stage approach is applied. In the first stage, the module is represented by a thermal equivalent circuit simplifying each individual cell as a homogeneous heat capacity without internal temperature gradient, allowing a cell-specific calculation of the temperature.

In the second stage, the model is reduced to a mean-difference model allowing the calculation of the temperature extrema in the whole battery module with a significantly reduced computational effort. For the parameterization, a set of measurements and methods for data analysis, which can be conducted in a non-destructive manner is proposed.

The resulting two-stage model is validated against common marine and stationary application profiles using a commercial lithium-ion battery module with 64 Ah NMC pouch cells in 14s2p configuration. Figure 2a below shows the comparison of the average temperatures while Figure 2b below plots the resulting temperature spread within the module. 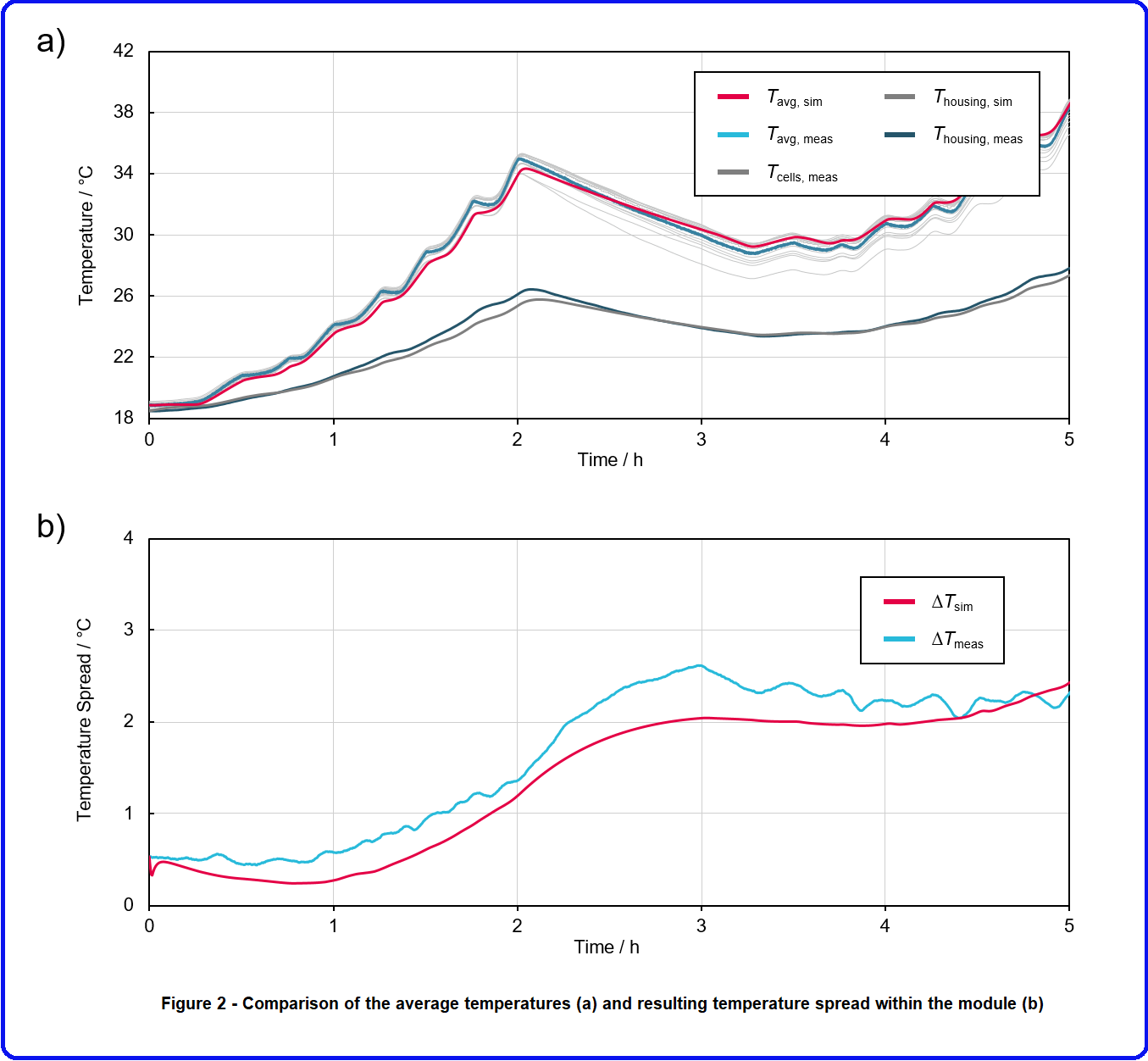 The validation results proof, that the novel parameterization and modeling approach is able to determine the temperature distribution with sufficient accuracy while reducing the computation time and effort by orders of magnitude compared to existing approaches. Applying this novel model within a digital twin for large-scale battery storage systems designed for marine or stationary applications would therefore allow the real-time simultaneous calculation of the temperature extrema occurring in every module within the system. Via real-time comparison of these signals with measured values, novel approaches for predictive maintenance and model-based optimization would be enabled with comparably low computational effort in comparison to currently used approaches.